Triceratops was a ceratopsian dinosaur that lived from around 70-66 million years ago and lived in western North America. Due to its impressive set of three horns and large frill, it has become one of the most famous dinosaurs. It was also one of the last known to have evolved, and represents, along with the other freshly evolved species, a new faunal phase of the Dinosauria, that was killed in its tracks prematurely 66 Ma.

Triceratops was replaced by Torosaurus as the main ceratopsian during Episode 6: Death of a Dynasty and only appears dead, killed by a male Tyrannosaurus off-screen, which was done to impress a female for mating purposes. Triceratops played a larger role in the accompanying book to the series. 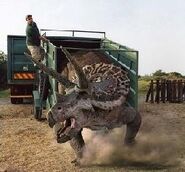 Theo coming out of a truck

Theo in triceratops creek
Add a photo to this gallery
Retrieved from "https://walkingwithdinos.fandom.com/wiki/Triceratops?oldid=16852"
Community content is available under CC-BY-SA unless otherwise noted.