Along with various other Palaeontologists, Dr.Thomas Holtz of Maryland University advised this episode. This Palaeontologist is known for his expertise on North American Dinosaurs of the Late Cretaceous, particularly of Tyrannosaurids. The Tyrannosaurus rex female is the focus of the plot.

The episode was shot in Chile and New Zealand.

This episode starts months before the extinction of the dinosaurs. The last dinosaurs are depicted to have been beleaguered by excessive volcanism for hundreds and even thousands of years. Though not mentioned in the series, the Deccan Traps of India are noted in the book - these mega flood basalt eruptions lasted for around a million years without end, and would have severely polluted the worlds climate and caused colossal damage to life on Earth; considering that in a single eruption of a modestly sized volcano, the world can feel the effects on a global scale, from famine to blizzards in summer due to climate changes and atmospheric pollution, and that these are usually events that last less than a week, imagine the terror of a million year event, and that it was not the only volcanism in the world by far. In the book, there is even a part where a vast Edmontosaurus herd that had been migrating for hundreds of miles (this species being Tyrannosaurus rex' staple dietry victim) was virtually obliterated by a huge volcanic eruption of a volcano in the then young and violent American Rocky Mountains. Of many thousands now only a pathetic remnant, scarcely enough in number to represent a viable breeding population, survives. It is also noted this was the last herd of Edmontosaurus in existence on Earth and of course it would be lucky if they recovered at all even without the death sentence of a meteorite hitting Earth shortly afterwards. All over the planet, similar volcanic catastrophies weakened the Dinosaurs and others just before a time they really should have been strong to cope with the ordeal of a vast meteorite impact.

All the conspiring factors finally ended the Reign of the Dinosaurs - though under the same circumstances, even humanity would be fortunate to survive. The episode focuses on a female 14 metre long T-Rex who abandons her nest, the eggs rendered infertile due to volcanic poisoning. Her calls for a mate are answered by a smaller male who has killed a young Triceratops and is eating it. Later, after repeated copulation, she eventually drives him off. The mother fasts for an extended period as she tends to her nest, dealing with raids by dromaeosaurs and Didelphodons. Only three eggs hatch and the mother brings down an Anatotitan to feed herself and her brood. While defending her two surviving offspring several days later, the mother tyrannosaurus is fatally injured by an

Ankylosaurus. The chicks remain next to the carcass of their mother until they, and the rest of the non-avian dinosaurs, are killed when an asteroid slams into the Earth, a catastrophe that triggers the K-T Extinction. A short final sequence shows the present-day Earth, dominated by large mammals, but still populated with numerous dinosaurs known as birds. Crocodiles and Turtles, both of which lived alongside the dinosaurs throughout the Mesozoic era, also pulled through the mass extinction, along with sharks, lampreys, and coelacanths. 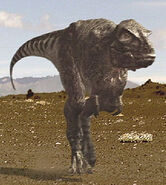 Add a photo to this gallery

The episode was shot at Conguillío National Park in Chile and Orakei Korako in New Zealand.

Death of a Dynasty Media

Retrieved from "https://walkingwithdinos.fandom.com/wiki/Death_of_a_Dynasty?oldid=17226"
Community content is available under CC-BY-SA unless otherwise noted.